The Heroes of Holbrook Academy 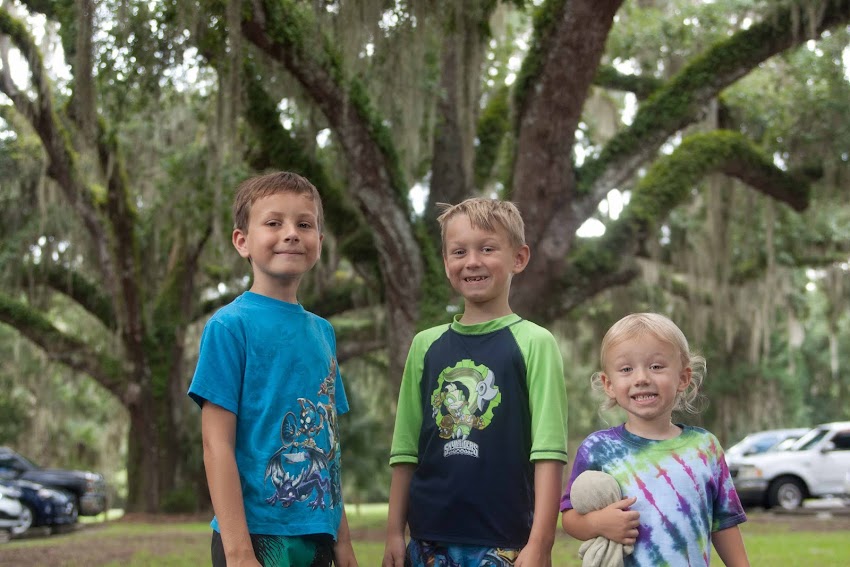 Dinosaur Mania For the Second Week

We finished up our 2 week dinosaur unit with a bang!  If it were up to Hayden, we probably would keep studying dinosaurs for the next 2 months, but I decided there are a few other things I want him to learn about first.  Plus, he has other things he wants to learn about as well, and there's only so much I can do in a day!  The cool thing about dinosaurs is that scientists are always discovering something new, and there is SO much information about them, that this could be a topic we revisit every year if we really want to.
We finished up our KWL chart yesterday.  I was very proud of what Hayden learned and what he was able to retain.  Here is what he said he learned:
We never did learn how long it would take their eggs to hatch.  Our paper machè eggs took 2 weeks to hatch.  Even Sawyer's, whose got stepped on by another dinosaur, survived long enough to hatch, too!
﻿﻿
﻿﻿﻿﻿
﻿﻿﻿﻿
﻿﻿

﻿
We read several more books this week which the boys (especially Hayden) thoroughly enjoyed.  I've listed them in the "Books We've Read" post.  We also watched lots of Dinosaur Train and a couple of National Geographic or IMAX dinosaur movies.
Our major projects this week were: 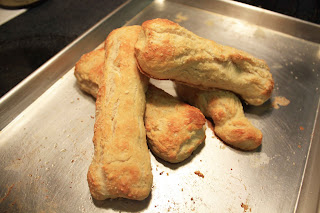 ﻿    5.  Dinosaur Habitat.
This is a work in progress still, and will probably continue to be one for several  weeks as long as Hayden is interested in it.  We transformed their train table into a dinosaur habitat with all his toy dinosaurs, a tree made out of newspaper, a nest made from sticks and mulch, Easter eggs (I mean Velociraptor eggs), a pond with water for the dinosaurs to drink from, and a volcano made from an empty bottle with homemade dough wrapped around it.  Sometime this weekend, we'll probably have it erupt. 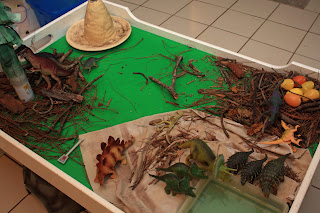 We also did some pretty cool math activities involving dinosaurs.  Hayden cut and pasted strips of paper labeled 11-20 on a piece of construction paper that turned out to be a dinosaur puzzle.  Another day, we went out on the front sidewalk with some measuring tape and measured out 4 different dinosaurs' lengths.  Hayden would stand on one end and me at the other.  We also tried using balloons on different length strings to see how tall they were, but the wind was blowing too hard, and they wouldn't go up to their full height.  We made dinosaur patterns also with blue and green dinosaurs.  I had Hayden make several different patterns.  Then, he glued one of the patterns to a strip of white paper, and we hung it up on the wall. 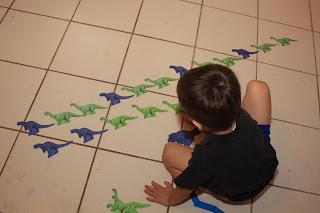 We did a few other things with the letter Ee this week, and their names (mostly to help reinforce Sawyer's knowledge and Hayden's handwriting skills).  One of the activities we did was masking tape name letters which I got from Preschool Express.  Lots of fun ideas there for learning your alphabet, numbers, art, etc.

We concluded our exploration of dinosaurs with a trip to MOSH (Museum of Science and History) where they have prehistoric sea creatures on exhibit now.  This actually is probably our 3rd or 4th visit to see them since the exhibit opened.  Below are a few pictures from that trip.

Cari Holbrook
I'm a homeschooling mom of 3 boys who keep me running from the break of dawn to the setting sun. I love the outdoors, and I love teaching. Every day with my children is a new experience and challenge!